Traffic is the lifeblood of our business community. Not enough, and businesses dry up; too much, and we have gridlock costing us time and money. The Lilburn CID dedicates considerable resources to finding ways for traffic to move through the area more efficiently. 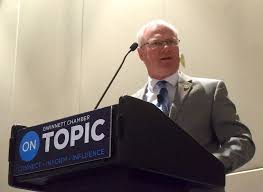 Realizing the economic impact of road congestion, it was heartening to hear Georgia Department of Transportation (GDOT) Commissioner Russell McMurry’s recent comments to Gwinnett Chamber of Commerce business leaders as he outlined plans to improve delays on major metro and state highways.

McMurry pointed out that Georgia has the tenth-largest transportation network in the nation along with the world’s busiest airport and the fourth-busiest port. However, Georgia is also number 13 on the list of most-congested states with the metro Atlanta area the nation’s fourth most-congested city. Despite these negatives, Site Selection Magazine has ranked Georgia as the # 1 place to conduct business for the past four years.

McMurry said that plans call for reducing traffic delays as much as 56% by 2030. To reach this goal, multiple road projects will be completed by 2040 at a cost of $2.46 billion. Included in these projects are the widening of I-285 and Ga. 400, which will impact Indian Trail/Killian Hill Roads along with Rockbridge/Jimmy Carter Blvd. as traffic moves to the available outer rings.

During the next five years, McMurry estimates that $730 million in state funds will be spent on road projects in Gwinnett County. Added to that are local sales tax-funded resources from Gwinnett County. Some of the projects that are either ongoing or planned (beyond five years) include:

McMurry complimented the collaboration of Gwinnett County Transportation Director Alan Chapman and Transportation Board Member Rudy Bowen saying, “Gwinnett County always comes to the table with a hand out to help, not a handout,” McMurry said. “That’s very key. I can’t emphasize that enough.”